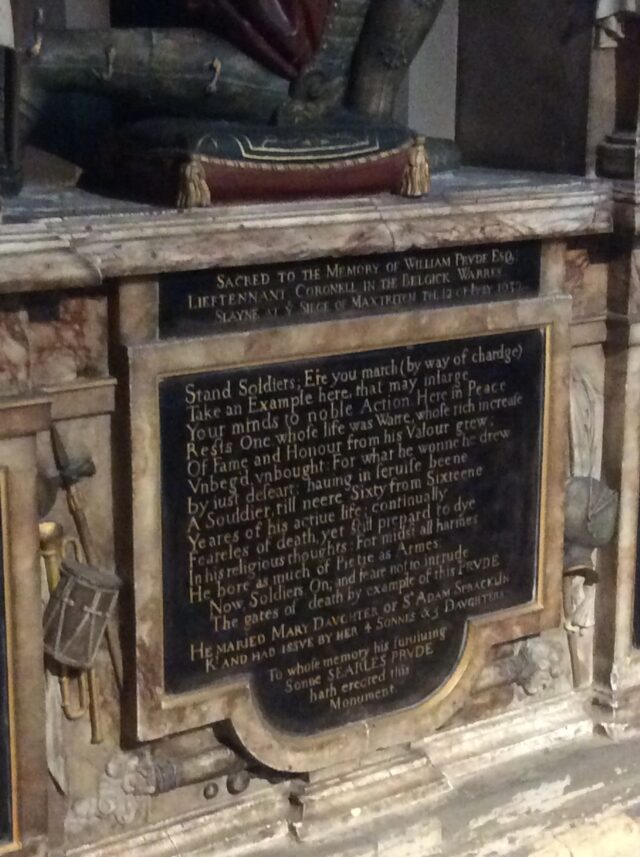 William Prude, “lieftennant coronell in the Belgick Warres”, who died at the siege of Maastricht in 1632, is the only seventeenth-century soldier in the database so far. We have one soldier from the late-sixteenth century, Cornelius Vandun, who served “with K Henry at Turney”, and one seventeenth-century admiral, Sir William Penn, father of the founder of Pennsylvania, who died in 1670. Military men were not commonly commemorated before the Napoleonic wars. From 1700 to 1789 we have only 8 records out of a total of 147. Then there is a sudden explosion. Between 1790 and 1819, officers are commemorated in 31 epitaphs out of a total of 163, a fourfold increase from the previous century, and their proportion remains high through to the First World War. Whether this is to be explained by the growing prestige of soldiering, or simply a greater number of men in uniform, I am not sure; probably a combination of the two.

Little is known about William Prude. He was presumably one of the many English mercenaries active in Germany and the Low Countries during the Thirty Years War, drawn by the prospect of loot and glory. His epitaph tells us that “his life was war”, and that “what he wonne, he drew by just deseart”, having been in service from sixteen till “neere sixty” – a point underlined by the trumpets, drums and cannons which embellish the tomb. His virtues are those we would expect of an old soldier: valour, nobility and “fearlessness of death”. Understandably absent, on the other hand, are any of those virtues commonly ascribed to soldiers in the era of national armies: patriotism, loyalty to the reigning monarch, and public service. Colonel Prude was a freebooter. If he fought bravely, it was on his own behalf, not for “king and country”.