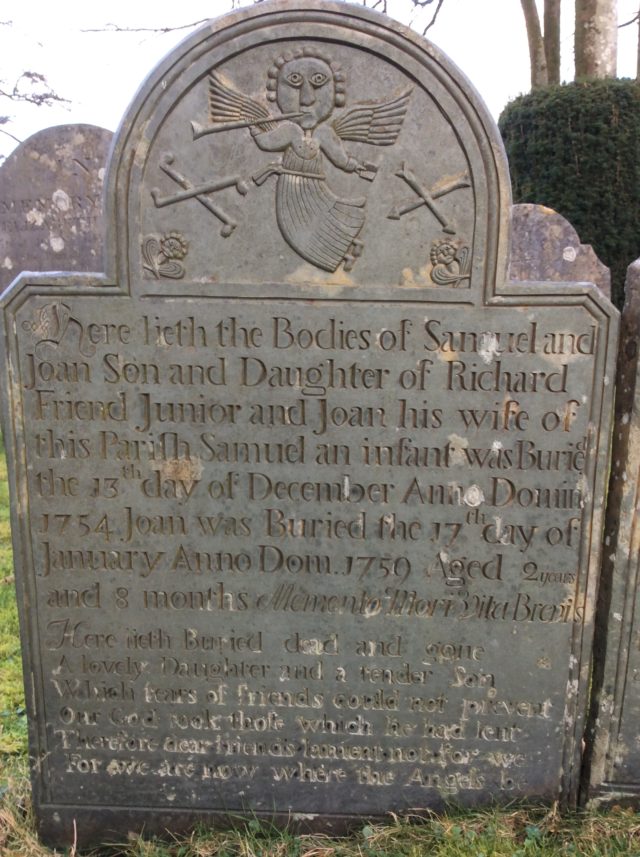 This tombstone of infant Samuel Friend and his sister Joan is quite special. For a start, it is unusually well-preserved for an eighteenth century tomb outside the church, being made of an extra-hard slate common on Dartmoor. (St. Petroc’s in Lydford contains several tombs cut from the same slate, some of them for other members of the Friend family.)

But the most charming feature of Samuel and Joan’s tomb is the naive angel which tops it, with her wild googly eyes. She is, presumably, blowing the last trump, but it looks more like she is smoking a huge pipe. There are other similar carvings in St. Petroc’s churchyard, possibly by the same local artist.

At the bottom of the inscription is a pious poem, of the sort common on children’s tombs, reassuring onlookers that “we are now where the angels be”. Above it are the Latin words: Memento Mori, Vita Brevis – “Remember death, life is brief”. I have created a special category for what I call “reminders of death”. It brings up 28 records in all, with the highest concentration in the early 17th century. (Between 1610 and 1650, 6 out of the 13 recorded epitaphs have a “memento mori” theme. ) By the mid-eighteenth century, reminders of death have become much rarer. I have 13 records dated between 1730 and 1790, out of a total of 107. Six of these are from St. Petroc’s; another three are from the  Priory Church of St Mary, Abergavenny. Perhaps it was only on the outer fringes of the British isles that this gloomy theme still persisted during the age of Enlightenment.