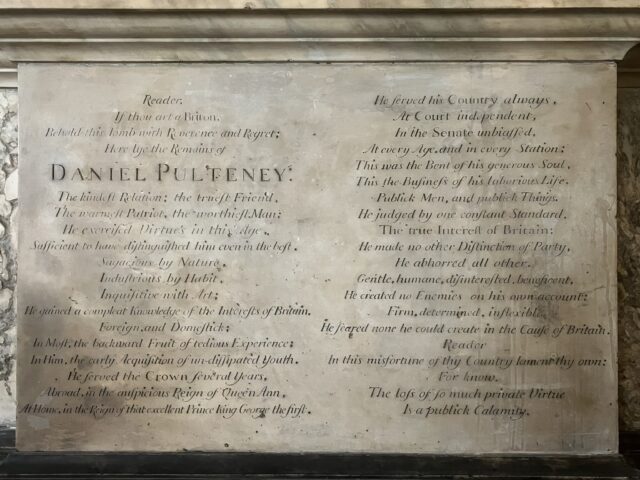 Daniel Pulteney (1684-1731) was a government official and politician, sitting in the House of Commons from 1721 till his death in 1731. Like his better-known cousin, William Pulteney, he was one of the “Patriot Whigs” opposed to the government of Robert Walpole, which might explain why he never held high office. His epitaph, in the cloisters of Westminster Abbey, is long on patriotic virtues and short on actual achievements. Indeed, it mentions no achievements at all. Epitaphs of nineteenth-century public figures never fail, by contrast, to detail the ways in which they benefited the country. I think we can see in this a shift from a “virtue-centred” to an “achievement-centred” conception of politics. In the eighteenth century, it was considered sufficient for a public figure to have manifested certain qualities of mind and character. In the nineteenth century, he had to have actually done something.

Among the virtues for which Pulteney is commemorated are “independence” and “disinterestedness“. The one implies that Pulteney was “his own man”, in no one else’s pocket; the other that he judged all things according to the national, not his own private interest. Both were quintessentially Georgian virtues. “Independence” last appears in 1839; “disinterestedness” in 1824. Neither virtue made it into the post-Reform era of organised party politics.