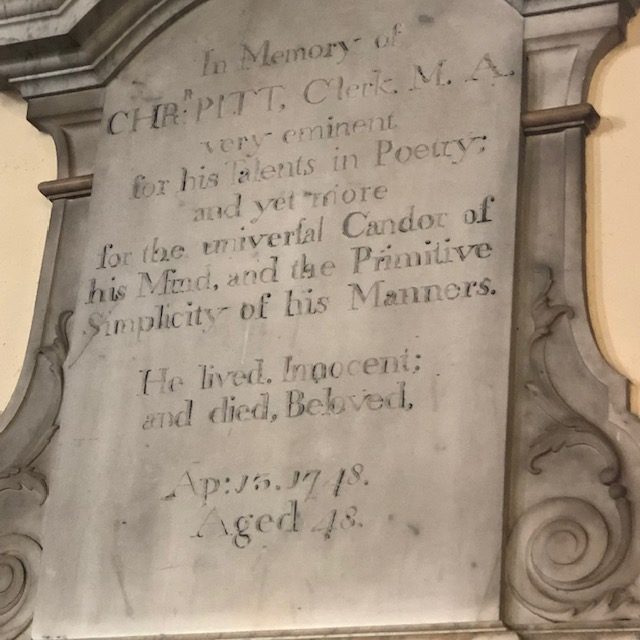 Christopher Pitt, an eighteenth-century clergyman poet, was resident most of his adult life in or near Blandford Forum, Dorset, where his tombstone stands. He is hardly known today, but was well respected during his life for his translation of the Aeneid, which earned him a short mention in Samuel Johnson’s Lives of the English Poets.

The inscription on his tomb is simple and elegant, and representative of a style which came into fashion in England in the middle decades of the eighteenth century. Seventeenth- and early eighteenth-century inscriptions are typically “unlineated”, meaning that their lines run on from edge to edge, as in ordinary prose. See the epitaph of Mary Marow (d. 1714) for a typical example. Christopher Pitt’s epitaph consists, by contrast, of short lines which have evidently been broken off at points carefully selected with a view to rhythm and “point”. This is a genre of writing all of its own, distinct from both prose and verse.

John Sparrow, the famous Warden of All Souls, wrote a fascinating little book, Visible Words (1969), on inscriptions as works of art. One chapter is devoted to the “lineated inscription”, which Sparrow sees as a typical expression of the seventeenth-century taste for concision and wit. But Sparrow’s survey is confined to Continental Europe. In England, still on the periphery of European artistic culture, the lineated inscription arrived somewhat later.

Lineation provided the epigrapher with some remarkable effects, which can only be appreciated by seeing his work in its original setting. This is, as Sparrow shows, a unique form of literary composition, addressed to both mind and eye together. It deserves more study than it has been given.