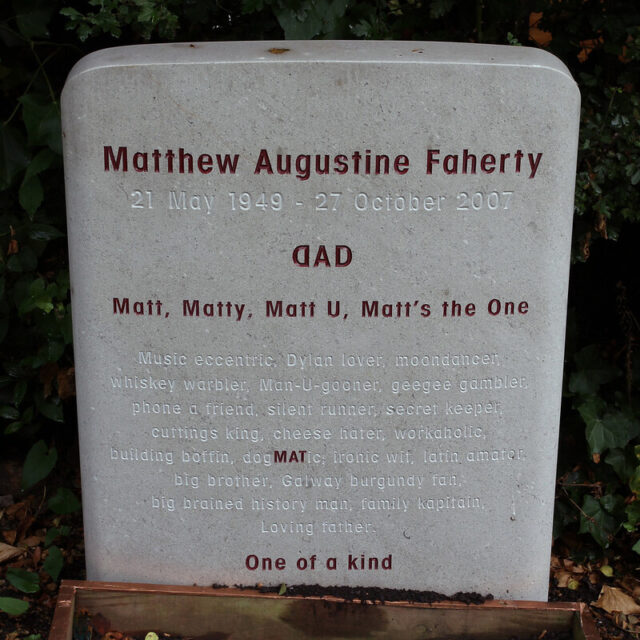 Highgate is a functioning cemetery, so my trip there allowed me to extend my collection into the 21st century. I lingered particularly in the vicinity of Karl Marx, a favourite resting place of old comrades. I didn’t find many personal virtues here, however, just a lot of mission statements. (Kay Titmus, spouse of the better-known Richard, is described as a “committed” wife, which makes it sound as if she was married to a trade union.) But as one moves away from Marx, family sentiment reasserts itself. “Loving” remains the most popular adjective – loving husbands, loving wives, loving parents, and (a new addition, this) loving grandparents.

The last three decades have brought some striking changes as well, however. Gone are the self-mortifying virtues of an earlier age; in their place “passion“, “vibrancy“, “love of life“, “mischievous Irish spirit. Gone, too, is any notion of a world beyond the grave. The tone is backward-looking, but celebratory. Perhaps this can be related to other recent changes in the ceremonial of death, such as the habit of wearing brightly coloured clothes to funerals, or of painting coffins with flowers.

The epitaph here, of Matthew Faherty, is representative of an entirely new type. Although long, it contains little that I could catalogue under any of my traditional virtue headings. It is an affectionate, jokey memorial to one individual’s eccentricities, as seen by members of his immediate family. The key line comes at the end: Matt Faherty was “one of a kind”. There is something in the modern mindset that bridles at the thought that an individual could be summed up in general descriptions, even honorific ones such as “brave” or “generous”. We want to be remembered for our quirks, not our virtues.