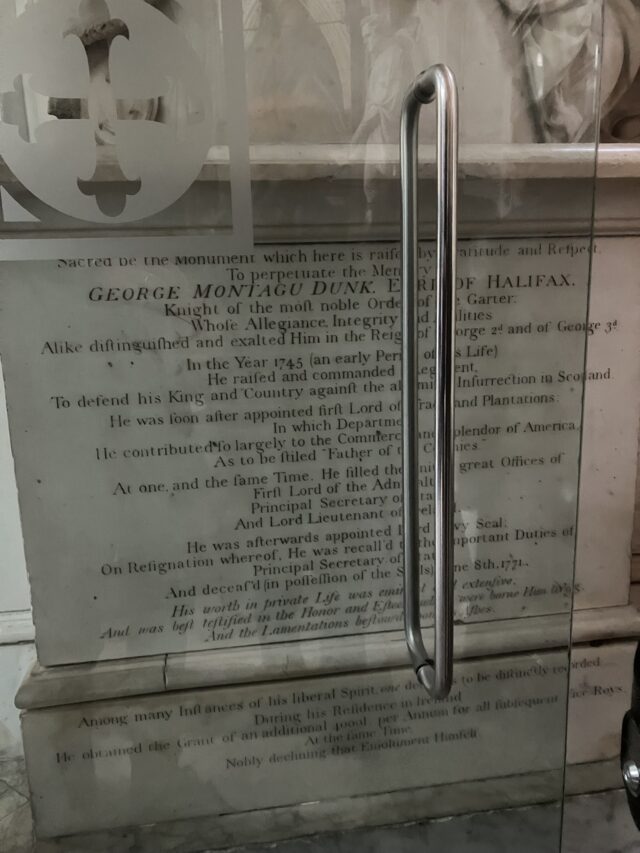 Sacred be the monument which here is raised by gratitude and respect to perpetuate the memory of GEORGE MONTAGU DUNK, EARL OF HALIFAX, Knight of the most noble Order of the Garter; whose allegiance, integrity and abilities alike distinguished and exalted him in the reign of George 2nd and of George 3rd. In the year 1745 (an early period of his life) he raised and commanded a regiment to defend his King and Country against the alarming insurrection in Scotland. He was soon after appointed first Lord of Trade and Plantations; in which department he contributed so largely to the commerce and spendor of America, as to be stiled "Father of the Colonies". At one and the same time he filled the united great offices of First Lord of the Admiralty, Principal Secretary of State and Lord Lieutenant of Ireland. He was afterwards appointed Lord Privy Seal; on resignation whereof he was recall'd to the important duites of Principal Secretary of State and deceas'd (in possession of the Seals) June 8th 1771. His worth in private life was eminent and extensive; and was best testified in the honor and esteem which were borne him living, and the lamentations bestow'd upon his ashes. Among many instances of his liberal spirit, one deserves to be distinctly recorded - during his residence in Ireland he obtained the grant of an additional 4000 per annum for all subsequent viceroys; at the same time nobly declining that emolument himself.
Church: Westminster Abbey (in Westminster, London).
Title: Earl.
Profession: Colonial administrator/politician, Minister of State, Privy Counsellor, Soldier*.
Sex: Male.
Virtue(s): Ability*, Achievement/success*, Distinction*, Domestic virtues*, Esteemed*, Honoured*, Integrity, Liberality, Loyalty/service to crown*, Nobility, Public benefactor*, Respected*, Worth*.
Year of death: 1771.
Age at death: not given (classed as: Adult).