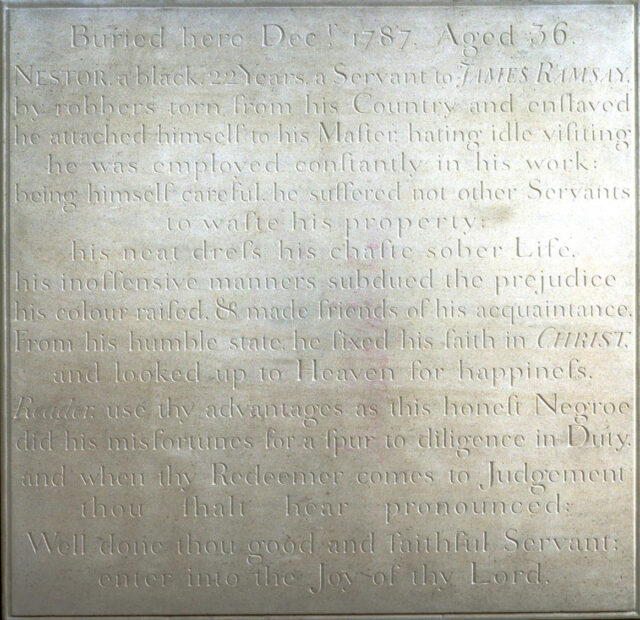 This epitaph for “Nestor, a black, 22 years a servant to James Ramsay”, is one of a kind. Epitaphs for servants are rare enough – so far the collection contains only 4 out of 532 – and epitaphs for black servants are presumably much rarer. Fortuitously, we have one other, from the crypt of St. Martin in the Fields. But Nestor’s epitaph is exceptionally long and detailed.

Nestor is described as being of “neat dress”, “chaste, sober life”, “honest” and “diligent in Duty”, and “hating idle visiting” – all virtues which might well have endeared a servant to his master. “Chastity” is rarely mentioned on tombstones. We have only three other entries so far, from 1645, 1672 and 1730, all women. Nestor’s being praised for chastity suggests not just that it was expected of him but that it was not taken entirely for granted; young ladies from good families were not usually mentioned as being chaste. “Sobriety” is another rarely mentioned virtue. There are four other entries, from the seventeenth and early-eighteenth centuries, where the word carries its older sense of decorum and restraint. Here, perhaps, it means simply that Nestor didn’t drink.

Nestor’s master, the Rev. James Ramsay, was an early opponent of the slave trade, having seen at first hand the treatment of slaves in the Caribbean. He was one of an influential group of abolitionists based in Teston, Kent, where he and Nestor are both buried – the “Testonites”, as they were called. ‘The plaque photographed here is a reconstruction carved by Emma Lavender, a stone-carver friend of mine, from the original; a resin copy resides at Teston Church.